skip to main | skip to sidebar

Hawaiian Financial Art by David Baeckelandt | Make Your Own Book 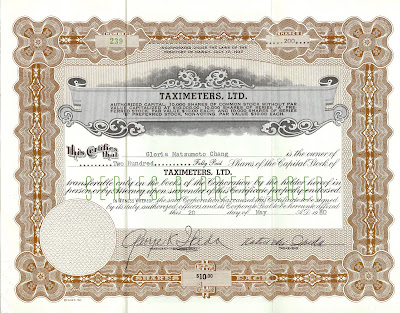 This post is courtesy of Ms. Joanie Shibuya of Honolulu and is about a uniquely Hawaiian company called "Taximetrics". I am unsure whether this was a taxi company in Honolulu or a small manufacturer of taxi components. Either way the Taximetrics stock certificate (front and back) is included here.

Besides having a cool company name not much seems to have survived. I would love to know more about the company. To that end I did a little web surfing about the owner, George Ikeda, and it appears that he was a petitioner for several measures before the city/county government. 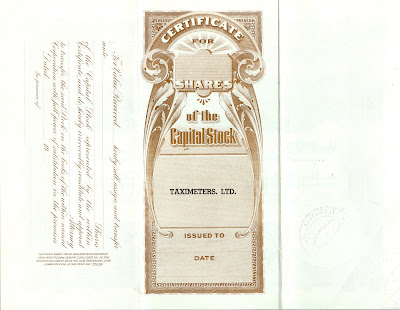 Do you know something more about the man or the company? If you do, please kindly let me know.
Posted by Dave Baeckelandt at 11:18 AM 2 comments: 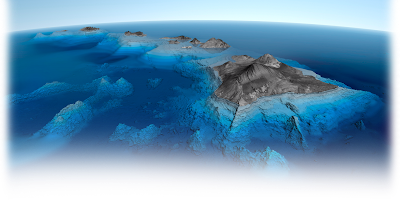 Aloha. Good evening. My name is David Baeckelandt. I am the author of the photo book that is on your table. I would like to offer a few words about “Hawaiian Financial Art” and the history of the financial markets in Hawai’i. 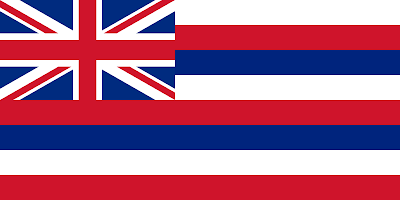 In my first meeting with Louis Perez I was struck by his vision for the AKAMAI Foundation: to train a cadre of financial analysts in Hawai’I that would propel Hawai’I into the forefront of Pacific Rim financial centers. My own experience of more than 20 years working in the financial markets of the United States and Japan and my interest in financial history made me an eager advocate. It is for this reason that I wish to make my first donations of Hawaiian scripophily – which is the term for collectable financial documents – to the AKAMAI Foundation. I can think of no better permanent home. 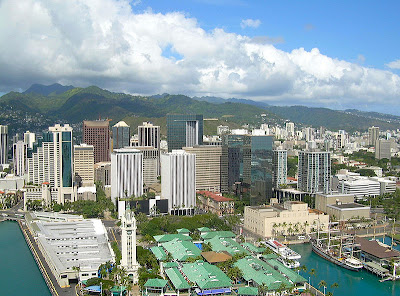 The predecessors to an organized exchange in Hawai’i were the early foreign trading houses’ agents in Honolulu. The very first permanent traders set up here in 1812. Mostly they were retailers who bought and sold many things, conducted some trade by barter and exchanged currencies. The first known retailer, run by a James Hunnewell and a Mr. Dorr, was set up in 1817 to also function as a bank and a ‘trading house’. But since they claimed to have no more than $104 at any one point in time it was hardly what we would today consider a thriving financial exchange! 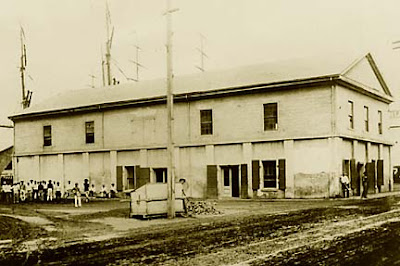 Real financial expertise had to wait for the arrival of real financial institutions. The first real trans-Pacific banking representation in Hawaii did not come until the 1850s. Page, Bacon & Co., a San Francisco & St. Louis based financial firm had a local merchant act as their representative as early as June 1854.

But the very first true banking presence in Hawaii opened its doors August 12, 1858 as Bishop & Co. They made a name for themselves by paying 8% interest on sums as high as $300 for terms up to 3 months! The bank’s ownership – and name – has changed over the years. Today they are known rightfully so as First Hawaiian Bank. 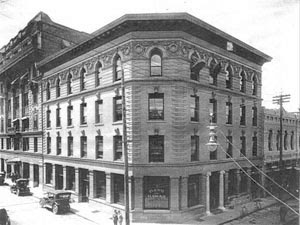 However, it was not until November 15, 1879 that there is any record of anyone in Hawaii making a living with their focus on buying and selling securities. On that date, William O. Smith & Co., Stock Brokers , announced that they had “opened an office on Kaahumanu Street, Honolulu, for the purchase and sale of sugar and other Corporation Stocks, Bonds, and other similar securities, solely on commission.” A news article at the time claimed that Smith’s broker was “the first enterprise of the kind ever attempted at these Islands.”
Business must have been substantial for William O. Smith because within a very short time he had attracted competitors. These competitors collectively voted on July 20th, 1883, to establish the Honolulu Stock and Bond Exchange. Within a week officers were elected. But the momentum that got them started didn’t carry through. Within a few years the exchange had ceased to exist.
But the rapid growth of business and industry in Hawaii meant the demand for capital was strong. And the need for a forum where capital could find concept was strong. So a little more than a dozen years after the first attempt, leading businessmen gathered and on August 26, 1898 elected officers of the new Honolulu Stock Exchange. The announcement must have been low profile however, because it was not until December 21, 1902 that the New York Times announced that “The Honolulu Stock Exchange opened its doors yesterday.” 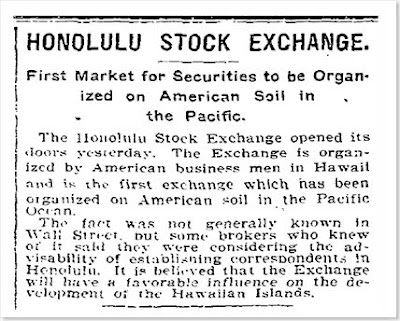 The capital that was raised on the Honolulu Stock Exchange was channeled toward the fast-growing industries like transportation companies, communications companies, and sugar companies. Naturally the need for locally-trained and domiciled financial analysts grew in lockstep with the expansion of the Honolulu Stock Exchange. Importantly, both capital and companies were a blend of East and West. Capital flowed from and to both directions with Honolulu as the terminal point. Thus capital was raised in Honolulu for Japanese multinationals, Indonesian plantations and Philipino electric plant securities at the same time that capital was invested in mainland companies. At the same time, capital flowed in from all across the Pacific Rim for Australian transplanted distilleries, Japanese transplanted department stores, and the latest technology transplants from California.

The Honolulu Stock Exchange’s very success in bridging the Trans Pacific capital flows unfortunately only presaged its eventual demise. The same factors that initially made the Exchange possible – better communications transmitting nearly instantaneous prices around the globe – eventually forced a consolidation of smaller financial markets into larger ones. On December 30, 1977 the Honolulu Stock Exchange closed its doors once again. 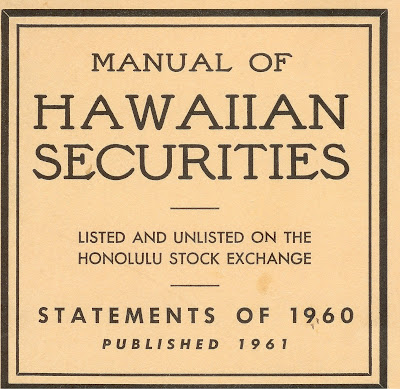 Your presence here today is a signal that the closed doors of the Honolulu Stock Exchange do not mean the vanishing of financial expertise from Hawai’i. In fact, I see a new dawn for the financial industry here in Hawai’i. It is my hope that under the auspices of the AKAMAI Foundation and following the leadership of Louis Perez, we will someday look back at today as a milestone to the furtherance of Hawai’I’s assumption of a new era of financial leadership in the Pacific Rim.
Thank you for your time. Mahalo!
Copyright 2010 by David Baeckelandt. All rights reserved. No reproduction in any form permitted without my express, written consent.
Posted by Dave Baeckelandt at 8:04 AM No comments:

The Bank of Hawaii

Any discussion of Hawaii, Honolulu, and the Hawaiian financial sector must of course begin with the Bank of Hawaii. A leader in its field and truly pan-Pacific before that term was even current.

The check below, perhaps a remittance home by a Chinese worker, captures all these elements in one document.

Copyright 2010 by David Baeckelandt. All rights reserved. No reproduction in any format allowed without my express, written permission.
Posted by Dave Baeckelandt at 3:25 PM No comments:

The Honolulu Stock Exchange was established on August 26, 1898. It existed until the late 1970s. The Exchange traded largely local securities which had a strong dependence on the sugar industry. In early years, transportation (mainly railroads), communications (telephone companies) and other infrastructure (electric, gas, etc.) companies listed on the exchange.
The below scans come from annual booklets published by the Honolulu Stock Exchange. 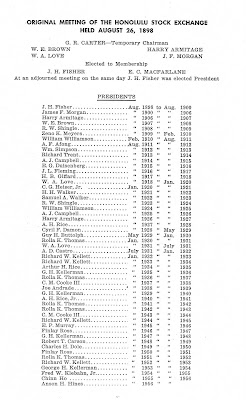 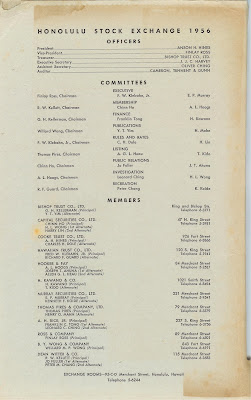 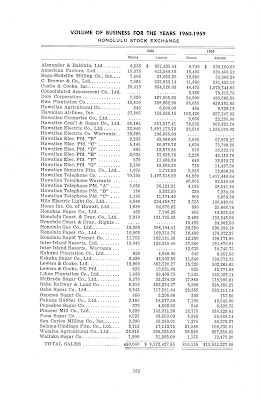 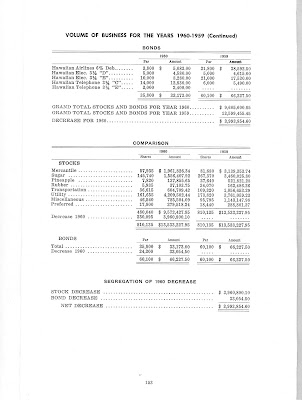 Copyright 2010 by David Baeckelandt. No reproduction permitted without my explicit, written consent.
Posted by Dave Baeckelandt at 7:52 PM No comments: 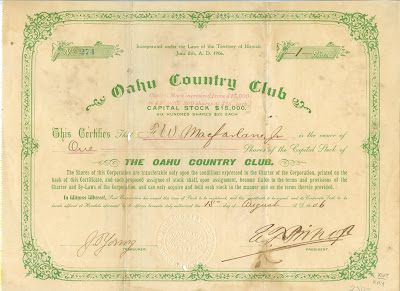 Posted by Dave Baeckelandt at 2:22 PM No comments:

Dave Baeckelandt
A simple salesman with an interest in history.